Please join me as Pastor Eli and I discuss Part 2 on the jewish assassinations of White leaders from my upcoming book, I’m Fearlessly White NOT A Slave – 1,000 Years Together. If you have any questions, comments, corrections, please put them in the chat or email me at courage@authorbarbie.com. I keep that for matters relating to my manuscript, publishing, marketing, and advertising. 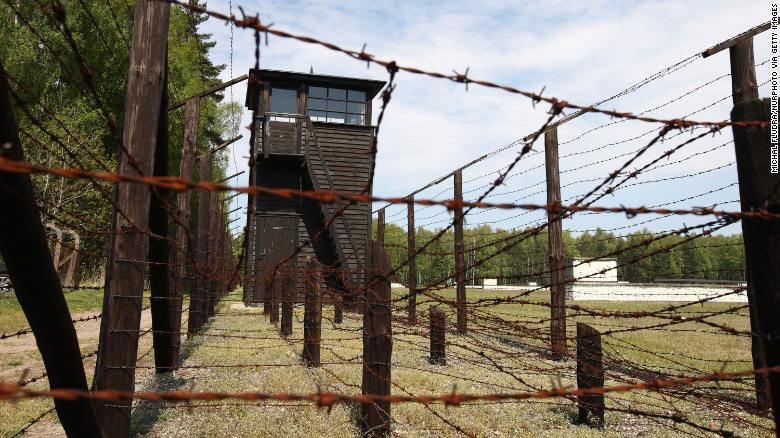 The court allege there is “strong evidence” that Harry S. guarded the transportation of hundreds of prisoners who were murdered in gas chambers.

Berlin (CNN)A 96-year-old man accused of being an SS guard at the Stutthof camp in Nazi-occupied Poland has been deemed “unfit to stand trial.”The man, named only as “Harry S.,” is alleged to have been stationed at the concentration camp — where it is estimated 65,000 people were murdered during the Holocaust.The court in Wuppertal, Germany, had been due to try him of having “aided and abetted [the] murder [of] several hundred [people],” court judge and spokesman Christian Lange told CNN.But owing to his inability to “conduct the defense in an understandable and comprehensible manner” the trial will no longer take place, Lange said. The court has decided, however, that he must “bear the expenses incurred by him in the proceedings himself.”https://8cc1da654205add36fe6e3c1e43868b8.safeframe.googlesyndication.com/safeframe/1-0-38/html/container.htmlHarry S. is accused of having served as a guard at the Nazi concentration camp, near the Polish city now called Gdansk, between June 1944 and May 1945.Female Nazi concentration camp secretary charged with complicity in 10,000 murders in Germany While there the court allege there is “strong evidence” that he guarded the transportation of 598 prisoners to Auschwitz-Birkenau, where 596 were murdered in gas chambers.

Here’re pictures from my upcoming book, I’m Fearlessly White NOT a Slave – 1,000 Years Together. I’ll also add the link after the show.

Seven Jews assassinated and martyred the White Christian Russian Imperial Romanov family under Bolshevik revolutionary Jewish Yakov Yurovsky. The bodies were taken to the Koptyaki forest, where they were stripped and mutilated. In 1919 the White Army commissioned an investigation but were unable to find the unmarked gravesite.

I was looking for songs with “Marie Antoinette” in the title. I came across lyrics with those words by Lacey Schwartz. I knew that Schwartz was Jewish since I wrote about how Eddie Schwartz, Chicago WIND radio, molested my sister Mary who was married to an Italian from Alta Monte, Italy. My sister was a radio call-in to his show. She had written and read a box full of positive and light poetry, such as “Chicken Soup for the Soul,” sort. When my brother-in-law found out, he ran to the radio station, put a loaded gun to Jew Schwartz’ head, and cocked the trigger. (I’m not violent nor do I condone it but want business-like solutions to White suffering under jewish masters.) The Jew begged for his life and knew that my relative had a new Italian restaurant, Sorrento’s, and bargained with Tony. The radio host said he’d give my brother-in-law a year of free advertising on his show for a year. In today’s market it would be between $300-500 per minute. Tony uncocked the trigger and put the gun back in his inner holster.

A short time later, two Chicago policemen began hanging around Sorrento’s during their lunch or break. Tony had to work other jobs besides his restaurant and the men sympathized with him and offered to buy into the business as co-partners. That would give my brother-in-law more time at home. I wrote in my book, that soon afterward, the two new co-owners who had 66 2/3% interest, forced Tony out of his own business.

Back to jewess Lacey Schwartz. She made the film Little White Lie. Her jewish parents raised her to believe that her father was a Sicilian Jew. Instead, she found out her jewish mother was screwing a Black man and Lacey was the outcome of this jewish/black sexual encounter.

When I attended a Missouri State University open forum, the black man behind me asked a question: “I thought I was black. How is it my DNA shows I’m 20% jewish?” Yes, the jewish women crave black animal sex not what I consider the highest or most intelligent form of love between a White man and woman. We can’t follow jewish masters anymore, but continue to develop our White species to our highest and leave the other races to do what they please or let God take care of them. It’s a matter of life and death for White survival.

As I edit my book for the 39th time, I found this interview that has sound advice from Holocaust Exactitude Revisionists, Carlos Porter, and Ernst Zundel. My last book chapter is on ideas for Whites to survive and get along. It’s taken from the end of the video below.

Ernst Zundel, Holocaust Exactitude Revisionist, interviewed Carlos Whitlock Porter, who father was a California mayor, lawyer, and wartime Navy officer in Japan. Zundel thought the information was motherhood and apple pie but useful as the war of lies rages.

“Keep the moral standards of the nation high. It’s sabotage on the home front to wangle something for ourselves on the side. Dishonesty and indulgence in us sap the nation’s finding strength. A decent world tomorrow depends on how much each of us lives today. And I would like to ask, ‘Is this a decent world? Do you think so?’

“The secret weapon that will win the war: morale. Congress can’t vote it. Dollars won’t buy it. It’s our job to build it. Put unity into your community. Unity starts with “you.” To win this war, stop private wars at home, on the job, with neighbors. Honest apology ends friction and starts teamwork. If we all pull together, we’ll all pull through. Be a rumor stopper. Rumors help the enemy. Trace the facts. Face the facts. Don’t exaggerate. Make your community gossip proof, smear proof, panic proof, fear proof. Every patriot shoots a rumor dead on site.”

Zundel says, “The holocaust is a rumor that has gotten out of hand. If all of us applied the very simple admonition that your father put out in the newspaper during the war, that rumors “help” the enemy. ”